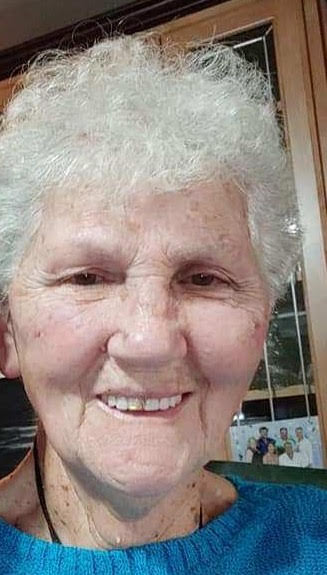 Aina M. Golly was born number 7 out of 11 children to James and Estella Savage in Marshalltown, IA and attended St. Mary's Catholic School in Marshalltown.

She quit school at the age of 17 to marry Warren D. Golly on April 23, 1950 and they were blessed with two children, John Dean and Laura Marie. After honeymooning at a diner and movie in Ames, IA, the newlyweds spent their wedding night at Warren's parents in Zearing, IA.

Over the years, Aina followed Warren all over IA for his job, as well as 4 years in the Army in El Paso, TX. When Warren was stationed in Germany, she came home to Marshalltown to work and be close to her family.

The couple moved many times during their marriage; living in Zearing, Marshalltown, Ottumwa, Sumner, Des Moines, Woolstock, and Wallingford (all in Iowa) and then moving to Willmar and Balaton, MN before returning to Zearing, IA where she was active in the community and a long-time member of the American Legion Auxiliary and St. Gabriel's Catholic Church. In later years, she and Warren wintered in the Valley in TX. They loved to travel and were blessed with the ability to visit almost all of the 50 states (including AL and HI), along with the Holyland, Ireland, Canada and Mexico. She attained her GED while living in Willmar and learned to keep a tight household budget by cutting coupons, shopping grocery store sales, garage sales and even learning to calculate price differentials between brands in the store aisles.

Aina was born a city girl but reluctantly adapted to farm life. She learned to walk beans, bottle feed calves, sort (almost) hogs and cattle, and drive (almost) tractor; while raising hundreds of ducks, geese and chickens. In later years while Warren was on the road, she was the primary care giver for the livestock while working full time.

Aina's and Warren's children didn't always appreciate the Avon Lady over the years because she knew what they were doing in school before they got off the bus in the afternoon.

She was all about family and loved family get-togethers. She appreciated visits to and from family members - it was always a joyous (food-filled) occasion.

In honor of Aina, all of her great memories and a long life well lived, her family invites you to join them in celebrating her life at her visitation and funeral mass at the Dakins Center in Zearing, IA from 4:00-6:30 p.m. with Rosary at 6:30 p.m. on Friday, September 6, 2019 and one hour before the funeral on Saturday, September 7, 2019 at 9:00 a.m. (funeral starting at 10:00 a.m.). In keeping with her traditions, lunch will be served after mass and burial.

Special thanks to the staff members of Care Initiatives hospice program and the Zearing Health Care Center. In lieu of flowers and memorials, the family encourages donations to a hospice program.

6 people have supported the family by purchasing them flowers or gifts from the Healing Registry.

John and Laura,
So sorry to hear of Aina's passing. What a great, kind and funny lady. I only saw her a couple of times after you moved from the neighborhood but it was such a joy to experience her sense of humor each time I saw her!
When my mom died 19 years ago, Aina found out a year later while visiting with someone from the area. She sent me a card and it meant so much to me and taught me that it's never too late to reach out to someone who has experienced a loss.
May God be with all of you during this difficult time. Share all your memories, I know you have many, and cherish them forever.
With Sincere Sympathy,
Cathy Umscheid Beaver

The attached photos are added to the memorial of Aina Marie Golly to help share their legacy.

Thank you for sharing your memory of Aina