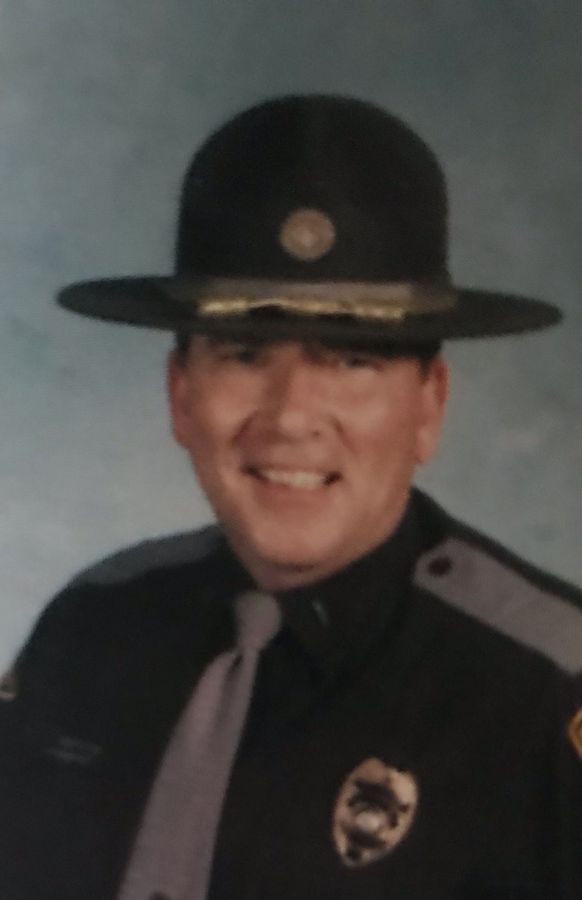 Steven "Steve" Dale Marsh, 72, of Madrid, Iowa passed away on August 22, 2020, at MercyOne in Des Moines, Iowa. Celebration of Life services are pending.
Steve was born to Kenneth and G. Irene (Anderson) Marsh on February 17, 1948, in Des Moines, Iowa. He was raised on a farm in Farlin, Iowa and the family later moved to Jefferson where he met his high school sweetheart Kathy Hansen at an archery tournament. Graduating from Jefferson Community High School in 1966, he went on to join the National Guard and attended Iowa State University.
September 01, 1967, he and Kathy were married at the First United Methodist Church in Jefferson. Steve attended Officer Candidate School (O.C.S.) training through the Iowa National Guard. After working with the Iowa Highway Commission as an engineer's aide, Steve became a policeman in Jefferson, attended the Iowa Law Enforcement Academy at Camp Dodge and later promoted to Sergeant. In January of 1974 he was sworn into the Iowa State Patrol and they moved to Knoxville. In 1984 Steve was promoted to Sergeant and his family moved to Oelwein. Three years later, he transferred to Ottumwa where he was promoted to Lieutenant, the District Commander of Post 14. In 1995, Steve was promoted to Captain and moved to Denison. Two years later, he relocated to Post 1 in Des Moines. The family settled in Madrid. During his time as a State Trooper, Steve received the National Law Enforcement Award in Washington, D.C. for his creation of the Alcohol Law Enforcement Retail Training program (A.L.E.R.T.) used by cities all over the USA to reduce alcohol sales by retail establishments to underage persons. He was also awarded by the Mothers Against Drunk Driving program (M.A.D.D.). Additionally, he was included as one of only twenty law enforcement from across the United States selected by the Secret Service to train at Quantico.
Steve was an active member of the Methodist Church, most recently Woodward United Methodist Church, a member of the Retired State Peace Officers' Association, the Masonic Lodge, Scottish Rite Masons, and held the title of Rainbow Dad for the International Order of Rainbow for Girls, Oelwein Chapter (1985).
Steve had many hobbies. He loved to play Texas Hold'em with his kids and grandkids. He enjoyed scratch off tickets and playing the lottery. He watched his grandkids play sports and shoot archery. He loved woodworking and building houses. He built several houses with his family, including their current home. He enjoyed all of his family time fishing, boating, and camping as well as, hunting deer, turkey, geese, pheasant, and elk. He and Kathy liked to travel to other states and Canada many times to fish with friends. They also made several trips to Switzerland. Steve and Kathy celebrated their 50th wedding anniversary in Minnesota with their kids and grandkids.
Those left to cherish his memory are wife Kathy, children; Julie (Bruce, Ottumwa, IA) Fridinger, Union, IA, Alicia (David) Jacobs, Woodstock, IL, Wade (Lisa) Marsh, Waconia, MN, Matthew Marsh of Woodward, IA. His grandchildren, Lauren Jacobs, Kate Jacobs, Annabelle Fridinger, Jerin Fridinger, Bronwyn Fridinger, Cooper Marsh, Beckett Marsh, Dugan Marsh, a brother, Duane (Elaine) Marsh, and his beloved German Shepherd Sophie, as well as many nieces and nephews.
He is preceded in death by his parents, sister Janey Arbuckle, brothers Don Marsh, Wendell Marsh, and Jerry Marsh.
Memorial contributions may be directed to the Woodward United Methodist Church.
Fredregill Funeral & Cremation Care in Polk City has been entrusted with Steve and his family.


I don’t think my Uncle Steve could have had a bigger fan or anyone more proud of him than my Dad...Steve’s big brother Wendell. Although my Dad preceded Steve in death and didn’t witness this event as it actually happened at my Dad’s funeral, I know he would want me to share this story as a tribute and to illustrate the measure of the man Uncle Steve was.

At Dad’s funeral, a man stood at the back of the room alone next to the door and no one seemed to know him...I remember introducing myself and asking him how he knew my Dad and he answered that he didn’t know my Dad, but he had read the obituary when he saw the last name and noticed that Steve Marsh was his brother, so he was hoping to run into Steve by showing up at the funeral. About that time Steve and Kathy and kids came through the door and I told my Uncle the man standing there had been waiting and hoping to see him and he then began to engage my Uncle in a discussion. I remember watching while I was snapping pictures of my relatives and thinking as they continued deep in conversation that I wished they would be done soon as I hadn’t seen my Uncle in years and selfishly wanted to catch up as I knew my Uncle’s family would be leaving to head back home shortly after the funeral.

Immediately after they finished the conversation, the man left as quickly as he had arrived. My Uncle looked slightly distracted and I asked him what had happened. He relayed to me what I thought to be a truly amazing set of circumstances...it seems years before my Uncle had pulled this man over while he was on patrol as the man and his car fit the general description of someone who had committed a crime. After questioning the man, he determined that he was not the individual they were seeking.

Interestingly enough...my Uncle shared with me that when the man began, he was a bit apprehensive as he had received threats over the years, by encounters with individuals threatening his life and that of his family, so he wasn’t sure what to expect...a thought that never entered my head, because of the naïveté of someone not involved in law enforcement. As It turned out, all these years later, the man wanted to share with my Uncle that while he indeed wasn’t the one they were seeking years ago, the fact remained that he knew he had not been traveling on the right path with his life and that the respect and dignity my Uncle displayed when dealing with him, so touched him that it started him thinking that he was facing a crossroads in his life and needed to make some positive changes before it was too late. In effect...my Uncle even in that brief encounter all those years earlier had changed his life and set him on a better path...one he could feel proud of and he just wanted to thank my Uncle...and so do I.

Thanks Uncle Steve for being one of the truly good guys who made positive impacts on others!

I worked with Steve on the state Capitol complex, mainly in the Iowa Judicial Branch Building. He was so kind and considerate of everyone and became a friend to many! We miss his stories, his laugh, and the atmosphere he brought whenever around him. I will miss just checking in with him as he made a huge impact on my life. My sincere and deepest sympathy go to his family now and always. God Bless! Jim Evans

The services for Steve have not yet been added. Please sign up below to be notified when the services are ready.

The attached photos are added to the memorial of Steve Marsh to help share their legacy.

Please help memorize Steve Marsh by recording your attendance below.

Thank you for sharing your memory of Steve