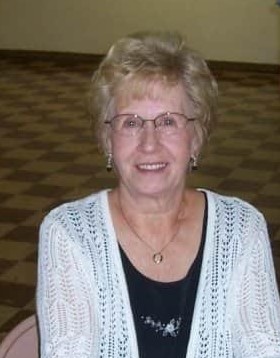 Lucille Jacobson, 86, of McCallsburg, Iowa, passed away on Tuesday, January 5, 2021 at Northridge Village Nursing Home in Ames, Iowa. Her memorial service will be held at a later date.
Lucille was born on July 23, 1934 to Byron and Mabel (Caltvedt) Wismer in Story County, Iowa. She attended school there and graduated with the McCallsburg High School Class of 1952. On April 15, 1955 she married John Jacobson at the Little Brown Church in Nashua, Iowa. The couple moved to the family farm in rural McCallsburg where they began raising their family together. She held various jobs over the years and worked at Donnelley's Marketing, cleaned houses, drove a special needs bus, and co-owned Gal's Grocery in McCallsburg with her sister-in-law Ione Holland. She went back to school and earned her LPN degree and worked at the Story City Hospital. Lucille retired from nursing in 1995. Lucille was a lifelong member of Bethany Lutheran Church in McCallsburg, and a member of the McCallsburg American Legion Auxiliary. Lucille loved her children and grandchildren unconditionally and they were her world. She also enjoyed baking her Norwegian delights such as kringla and various other goodies, cooking, crocheting, supplying the neighborhood children with Schwan's Ice Cream.
Those left to cherish her loving memory are her children Jerry Jacobson of Visalia, CA, Kevin (Kimberly) Jacobson of McCallsburg, IA, and Brenda (Arthur) Easley of Omaha, NE; grandchildren Alissa (Chip) Williams, Tyler (Libby) Jacobson, and Shane (Kelsey) Jacobson; great-grandchildren Miles, Reed, and Jacob Williams, Eli and Emarie Pearson, Eaton, Easton, Wade, Wyatt, and Waverlee Jacobson; siblings Rosalyn Volpendesta and Franklin (Joan) Wismer; sister-in-law Ione Holland; many nieces, nephews, and close friends.
Lucille was preceded in death by her parents, husband of 51 years John, grandson Travis Jacobson, brother LaVern Wismer, sister Evelyn Hernandez, brothers-in-law Lou Holland and Dominic Volpendesta, and sister-in-law Shirley Wismer.
Memorial contributions may be directed to the family.
Fredregill Funeral & Cremation Care has been entrusted with the care of Lucille and her family.

Lucy was a great person and will be truly missed by all rest in peace with gods loving hand around you!!

What loving and sweet lady. She will be
Dearly missed. Thoughts and prayers to all the family. Cherish all your sweet memories. Bob and Linda Wheeler.

The services for Lucille have not yet been added. Please sign up below to be notified when the services are ready.

The attached photos are added to the memorial of Lucille S Jacobson to help share their legacy.

Thank you for sharing your memory of Lucille