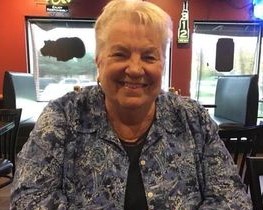 Pat was born across the Missouri River in Omaha Nebraska to Charles and Marie Weidner. That was as close to being a Cornhusker as Patty would be for the next 7 plus decades. Pat Reece was pure Iowa.

Pat was the oldest of 3 children born to Charles and Marie. While many Americans were lured west by stories of boundless wealth and gold in the hills of California, Charles, Marie and Pat, along with her younger siblings, Sandra and Jerry followed the aroma of Zeno's Pizza and Taylor's Maid-Rites east to Marshalltown, Iowa.

Pat graduated as a Bobcat Marshalltown High School in 1963 and has earned an Associates of Arts degree from Marshalltown Community College.

Pat married Lavern Reece and settled in Zearing, Iowa in 1965, which, true to its motto, is "A Great Town to Call Home." Pat and Lavern had three children Jeff(Dawn), Scott(Joanie), and Jodie. Pat became close with Lavern's brothers and sisters and their families. They enjoyed traveling, many reunions and trips to the lake together over the years.

Pat and Vern owned and operated Reece's in Zearing. Pat was the heart, soul and muscle of PJ's Café named after Pat and Jodie. She was very proud of her restaurant, but more importantly was proud of the people she employed.

Many of the kids from Zearing and the surrounding area found their first job that was not detasseling corn or working on their family farm, at PJ's. Patty and her employees would wake before the sun to make sure that the coffee and donuts were hot and fresh for the customers who would start their day at PJ's before their long hours tending the fertile soil in the heart of Iowa. Throughout the 1980's and 1990's PJ's always had fresh donuts and a smile at the ready.

It brought her great joy when people mentioned that they worked at Reece's and PJ's.

While living in Zearing, Pat and Vern loved cheering on Jeff, Scott and Jodie playing sports for the NESCO Royals from where all three children graduated. The Reeces enjoyed skiing in Colorado, looking for arrowheads along the shores of the Little River in Leon, Iowa and spending time with friends and family.

After Lavern passed in 1999, Pat semi-retired to Ankeny, Iowa where she worked at Target deli and was a teachers' aide for special needs students at Johnston Community Schools. In Ankeny, she enjoyed family and friends, happy hour at The Diner, swimming at the YMCA, and enjoying the outdoors with her neighbors on her patio.

With her friends and family by her side, she made her annual pilgrimage to the Iowa State Fair where many considered her to be the ultimate authority on the culinary creations offered there. When the Fair was cancelled in 2020, Pat was committed to keeping her discerning taste buds sharp and kept her streak intact by attending the "Taste of the Fair'' where she remained the arbiter of all things-on-a-stick.

Lake Rathbun was Pat's happy place. Here, she would gather with her and Lavern's family, spending days fishing, laughing, and making memories. She fancied herself a fisherwoman. Pat, Marie and Sandy visited Rathbun during the hot and humid Iowa Summers. There, the ladies enjoyed cold beverages and watching deer and other wildlife while trying to catch that evening's dinner. She would return from Rathbun with stories of her angling prowess. One year after her annual trip to Lake Rathbun, there were reports of Patty and Sandy causing a disturbance at Captain's Landing, the watering hole just outside of Moravia. No one is exactly certain who started the events that occurred at "The Landing" but her family and friends understand that whatever restitution needed to be paid has been satisfied and she and her sister were welcomed back the next year.

Pat was a loyal Iowa Hawkeye fan. She rooted on the Hawkeyes with an inexplicable combination of optimism and masochism. She endured the seemingly never ending frustration sprinkled with glorious moments of jubilation.

Pats' gluttony for punishment was not limited to rooting for the Hawkeyes. She was also a devoted Chicago Cubs fan. She would proudly "Fly the W" and text her friends and family "Cubs Win!" on the good days, and shake her head in disappointment when the Cubs fell short. On November 2, 2016 the Cubs won the World Series for the first time in 108 years. She was overjoyed and could only think of how much her mother Marie would have loved it.

Some say that years of cheering on the Hawkeyes and Cubs formed the grit and resilience that allowed her to beat a lung cancer diagnosis and become a cancer survivor for more than a decade.

Pat was preceded in death by her parents Charles Weidner and Marie Weidner (nee Faust) and her loving husband Lavern.

There will not be a funeral, but a celebration of life will be held at a later date.

Such a sweet lady and such a nice tribute to her.

Pat was an awesome lady and friend. Always a kind word of encouragement. Will miss lunches with her as she was so kind to include me. She will always be remembered with a smile!

Aunt Patty always made me feel like I was an actually full blood niece. For 23 years in knowing her, she always gave me big hugs at all of our gatherings. She had this “Ok, Kari” (drawn out sound) that usually implied, “She’s not falling for it.”

She loved getting the 5x7 pictures I sent of our family every Christmas. When I visited at Easter time they were all over her fridge.

We loved meeting her at the Iowa State Fair. She was always at a picnic table, saving our spot. I remember being motivated to bring her any fair food possible because of her reaction. She loved to try all the different flavors. I always got as many different foods as I could knowing that she would be impressed and would try each one.

I loved having totties and playing games together. I loved laughing with her over Easter and Thanksgiving. I loved spending family time with her. I loved seeing her hold all the kids and no matter how she was feeling that day, she would laugh and smile with them.

I am so sorry Pat an I had just talked a few weeks ago catching up on where our family was an added grandchildren.She was a great lady we all loved.she will be missed by all who knew her.She mentioned how she missed her sister Sandy an brother Jerry.Blessing❤️

She is my cousin on her dads side. When we would go to grandmas on Christmas the young adults would go to the basement and I think there were some adult beverages involved. I believe she was like her mom. Spunky is the word that comes to mind. I just reconnected with her recently through Facebook. I wish I’d have been better connected through the years. RIP Pat.

My times with Pat will forever remain treasured memories for me. I have wonderful memories of Pat, Bernie, Jeff, Scott, and Jodie. The trips to Leon, Christmas in Zearing with Pat as hostess, the 4th of July floats we got to ride on in the Zearing parades, watching Jeff and Scott play basketball, and of course, many Sundays at Grandpa and Grandma Reece's are events I hold dear. One memory sticks out in my mind; we were at Zenos and Pat was being her fun self and she slid a glass of soda across the tables and it caught the edge of one table as it left the other table and soda flew everywhere! The look on Pat's face was priceless. Oh how we laughed!

I know that Pat is with Uncle Bernie, Aunt Ramona, and her mom and dad now and though we will miss her here, she is surrounded by loved ones who I have no doubt met her with open arms.

We have so many wonderful memories over the years!! Always loved talking about memories with her and laughing together! Pat loved her family and spending time together. I know she is reunited with Uncle Bernie and other family, including my mom, having a great celebration. Pat was a dear soul and held a special place in my heart. I will miss her dearly.

The services for Patricia "Pat" have not yet been added. Please sign up below to be notified when the services are ready.

The attached photos are added to the memorial of Patricia "Pat" Reece to help share their legacy.

Thank you for sharing your memory of Patricia "Pat"