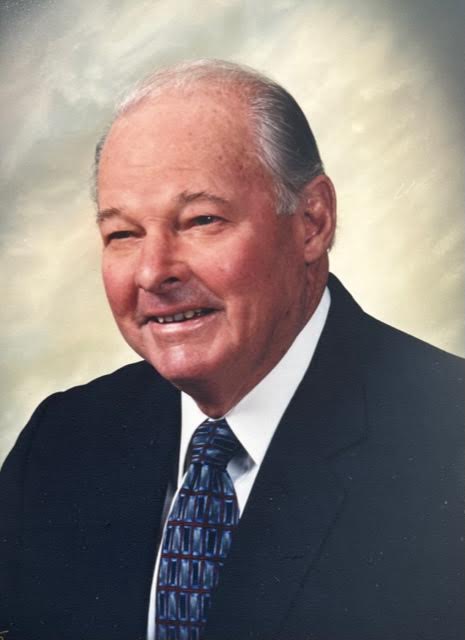 Alvis was born June 14, 1927 (Flag Day!), to Frederick Thomas (F.T.) Shaw and Winifred L. Worthington Shaw in Perry, Kansas, on the family farm which had been homesteaded by his grandfather from Tennessee. He was preceded in death by his parents, an older brother Marlin and an older sister Mary Grandstaff, all of Perry, Kansas.

Alvis joined the United States Marine Corp on October 3, 1946 and was stationed at Camp J.H. Pendleton in Oceanside, California. He proudly served as an Amphibian Tractor Crewman who delivered fuel to Nome, Alaska, and was also qualified as a Pistol Sharpshooter. Sgt. Alvis E. Shaw was discharged October 2, 1949. He obtained an Associates Degree in Agricultural Operations from Kansas State.

Upon his return to Kansas, Alvis stopped by his sister's house to target practice in her backyard. It turned out that the sharpshooting certification didn't really pay off when he met Esther Louise Decker who was also there target practicing. Let's just say, she whipped his butt and it was love at first shot! They were married in Oskaloosa, Kansas on December 1, 1950. Esther's family always said they were "sure glad they married Alvis."
The family farm was involved in the 1951 flood in Eastern Kansas; the worst flood since 1844. The farm was bought by the Army Corp of Engineers to build Perry Dam. Alvis had heard of a farm for rent near Colo, Iowa, so he and Esther packed up and moved to Iowa in 1953. The Sokol farm north of Collins became available, so they moved to that farm in 1958 and in 1980 built their brand new house "in town."

Being the "King of Volunteer" that he was, Alvis loved being a member of the Collins Lions Club, Collins American Legion, Colo Masonic Lodge, Collins United Methodist Church, and in 1980-81 served as Worthy Grand Patron of the State of Iowa, Order of the Eastern Star. He also served as Collins School Board President.

Alvis and Esther were always busy whether is was square dancing, golfing, hiking, carving, playing keyboard, camping, visiting all 50 states, Canada and Mexico, or cruising. There were annual summer trips to Leech Lake, Minnesota with three to four other local families where the adults got up early to go fishing and the kids slept in until water skiing time every afternoon. Who even knows how many games of cribbage, Mexican dominos and 500 were played over the years ending with the thrill of victory or the agony of defeat.

Alvis and Esther spent 28 winters in Tucson until they finally decided in 2019 it was time to return to Iowa permanently.

He will be tremendously missed by his wife of 71.5 years, Esther of Collins, and daughter Marla and granddaughter Kial Fukuda, both of Tustin, CA.

In lieu of flowers, memorial contributions may be directed to the family so they can be distributed to local organizations.

Fredregrill Funeral & Cremation Care has been entrusted with the care of Alvis and his family.

Plant a tree in memory of Alvis

Sending hugs to dear Esther after losing her beloved Alvis. 💔🙏❤️. Alvis was truly one in a million, sharing his time, energy, expertise and love. Thanks for the screech ❤️. Maxine Russell

Leaving a living legacy, RIP dear Alvis. You earned your rest, and your wings. Watch over Sweet Esther as you always have.

Memorial Tree was purchased for the family of Alvis Eugene Shaw by Maxine Russell.

Alvis was a delight to visit with. He had a wealth of memories about Perry and his years at Perry Rural High School. Great guy. Many precious memories! Paula Hladky, Perry, Kansas

Alvis & Esther were our neighbors for many years and was glad they were. Kind & always there to help if needed. My deepest condolences to his wife & daughter & the rest of the family. ✝️❤️

I met Alvis in the spring of 2000. And I had the pleasure of working and conversing with him every spring since then. He easily made my Top Ten list of the Nicest People In The World.

Alvis was a good man. I remember him and his wife coming down to Newton for OES meetings. Very nice couple.

I was fortunate enough to know alvis through the lodge. He was a great mason and man

Uncle Alvis was the kindest and most caring fellow I ever knew. Our last visit was such a great visit, so glad we did get to visit for a couple days at that time. We loved him and will miss him but we will see him in the here after.💕

The attached photos are added to the memorial of Alvis Eugene Shaw to help share their legacy.